FX: "FX has not announced the official date or night that the next installment of TUF will air, however, it is highly unlikely it will air Wednesday nights. The official announcement will be coming in the next two or three weeks."
0
Top

Jon Jones ha scritto:"I tried out for 'The Ultimate Fighter' back when I was 20 years old. I remember making it through the first round and then approaching a table to grapple for the second round and having Dana – I think himself, I remember him being at the table – saying, 'Man, you're too young. You're 20 years old, and you have to be 21 to apply for this show, but we're going to let you roll anyways. But you can't go much further than this.' I was like, 'Alright.' I was rolling and having a great time, and that was it. That was the end of the scenario."

Mike Tyson on the set of TUF 17. The former heavyweight boxing champ is rubbing elbows with UFC President Dana White as part of the upcoming season of The Ultimate Fighter, coached by UFC Light Heavyweight Champion Jon Jones and his nemesis, two-time middleweight number one contender Chael Sonnen. Yes, the same "American Gangster" who called "Iron" Mike a "fake" and "protected" champion. 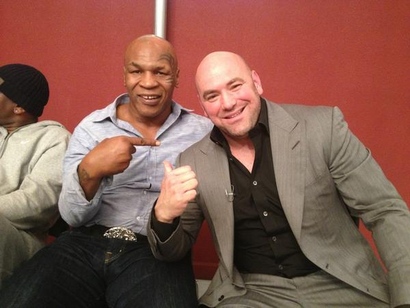 Dana White: Next TUF house is 'terrified' of one guy

ZioDanilo ha scritto: Dana White: Next TUF house is 'terrified' of one guy